In this tutorial we'll go through the basics of using runaway, a simple tool to run experiments from your computer on remote hosts. For more motivation on why using runaway, you can check the home page.

We will assume that you already have runaway installed on your computer along with some execution profiles (at least the localhost profile). Check the install page, if it is not the case.

From local to remote execution

For this tutorial you will have to clone this repository. It basically provides a mock experiment, in the form of a run.py python file, that generates some results in a results.npy file and a figure in plot.png:

To locally execute your code locally, you can type in your terminal:

By doing so, you spawn a python process that executes the python script. The following chart represents this logic: 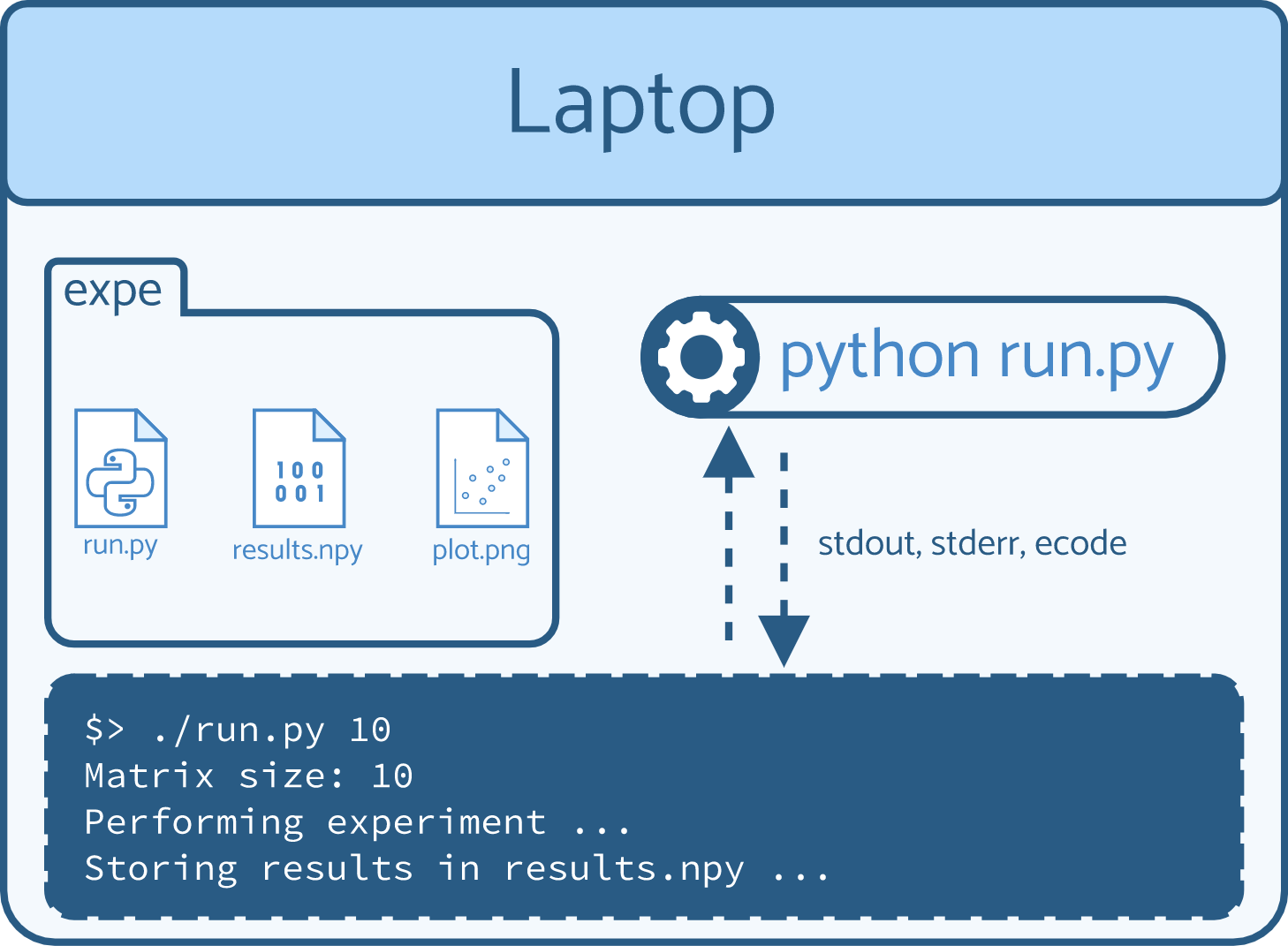 After having executed the script you should be able to read the figure:

And we remove the data with:

Now, we are going to use runaway to execute this script on a remote host. If you want to run a script a single time, then you must use the runaway exec subcommand, which works in the following way:

For a starter, we will use the localhost profile which connects to your actual computer. The runaway command boils down to:

When this command is executed, runaway will go through the following steps:

After executing the script with runaway, the data created during the experiment should be available in the folder, as well:

Congrats, you've made your first remote execution with runaway! One of the nice features of runaway, is that it allows you to run the same experiment on a different platform pretty easily. If you want to run it on your local_cluster profile (defined in ~/.orchestra/local_cluster.yml), you just have to run :

And there you are !

Despite the fact that this execution was brought to completion, it was not completely satisfying in terms of data transfers.

To see that, we need to dig into the internals of runaway, and particularly how the data are transferred between the local and the remote end. To do that, under the hood runaway uses a simple two steps procedure:

Let's replay the previous experiment with this in mind. First we pack the local folder into a .send.tar archive which will be sent to the remote end: 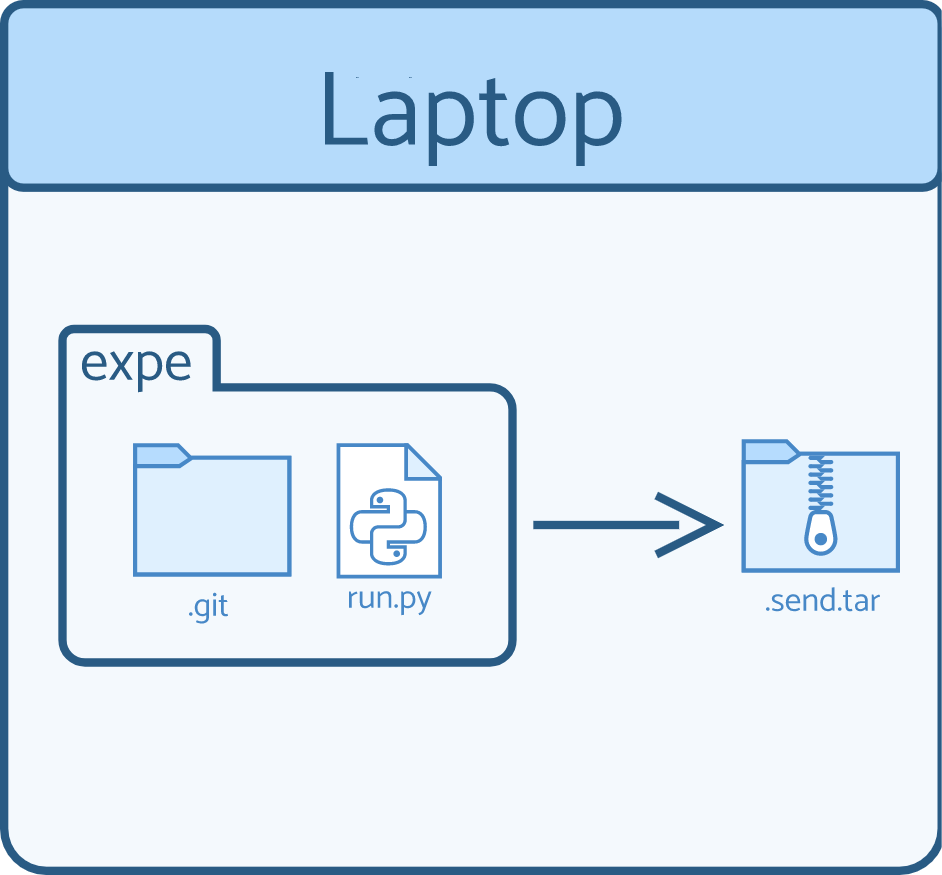 Oups! A first mistake occurred here: We included the .git folder into the archive, while we only needed the current version of the file. The first source of optimization is to reduce the volume of unnecessary input files sent.

Resuming our experiment, runaway transfers the .send.tar archive to the remove end and unpacks it in a folder named after a hash (see next section to know more about remote execution storing): 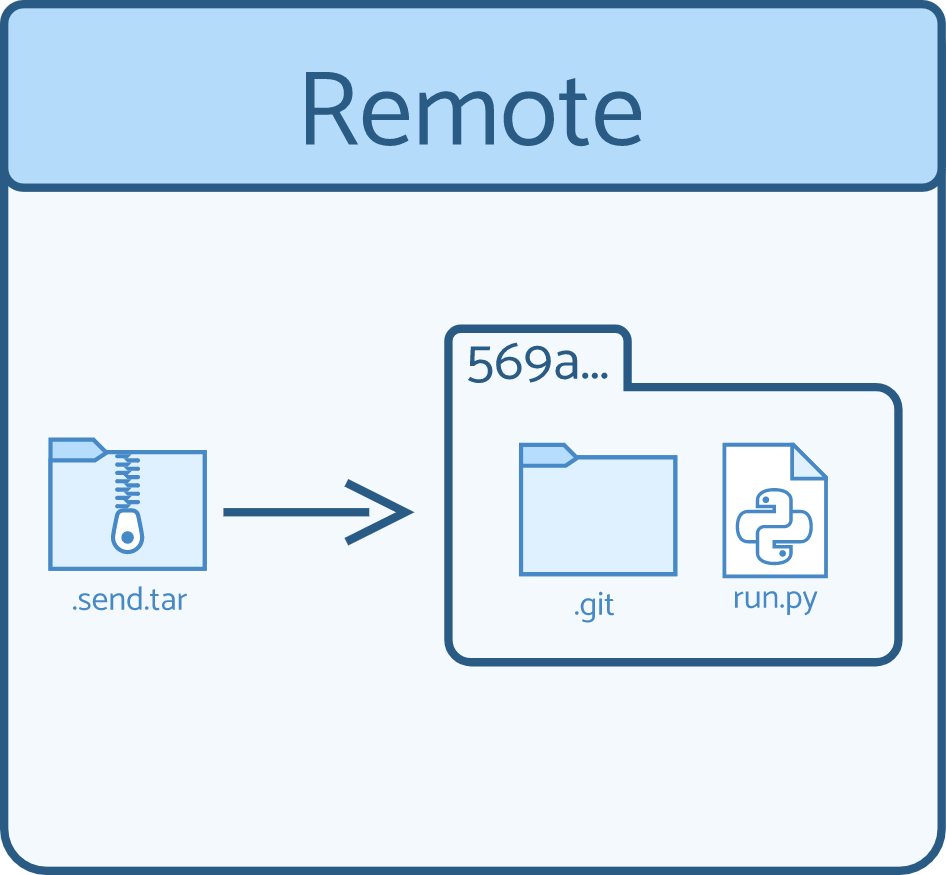 Now runaway takes care about executing the script, which generates some output files in the folder. Once the script is completely executed, the content of the folder is again packed into a second archive named .fetch.tar: 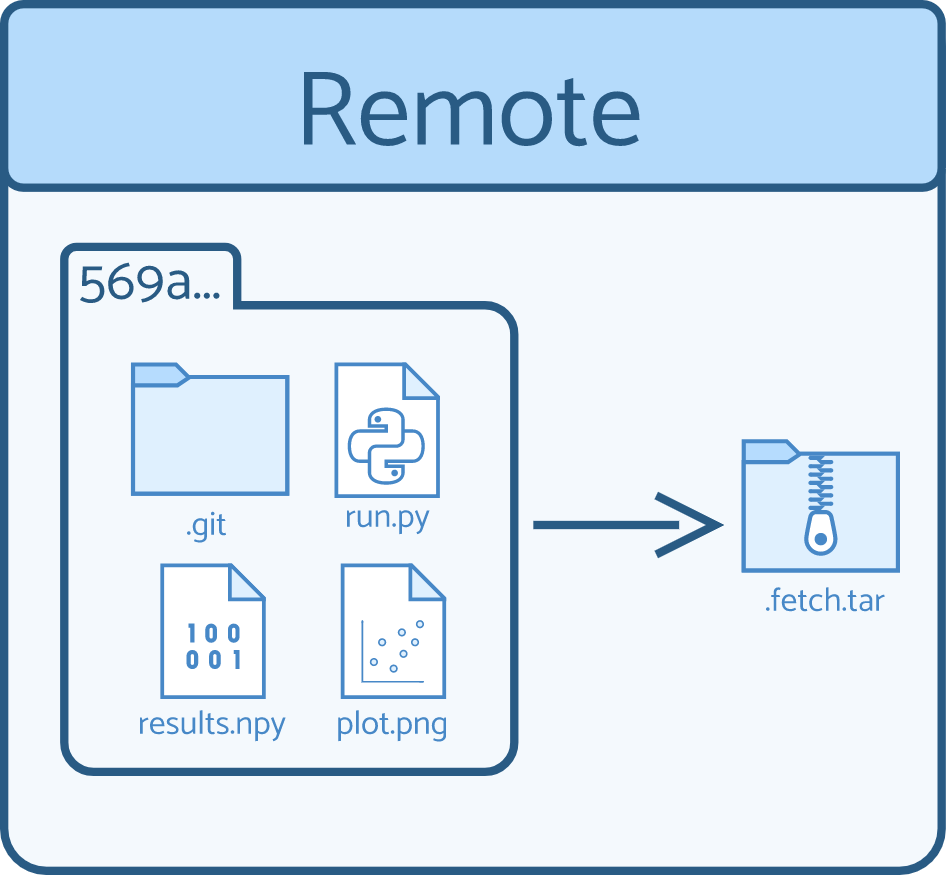 Oups! Second mistake here: The .git folder and the run.py files are again packed in the fetch archive, while we only needed the results.npy and the plot.png. The second source of optimization is to reduce the volume of unnecessary output files fetched.

Following, the .fetch.tar file is brought back to the local end using scp, and unpacked in the local folder. The local .send.tar and .fetch.tar archive are deleted to leave only the code files and the output.

In summary, there are two easy ways to optimize our data transfers:

This can't be made automatically by runaway, but we do provide a way to specify this using .sendignore and .fetchignore files. Those two files use the same approach as .gitignore files, and allows you to specify files that will be ignored during the sending and fetching of data.

For example, in our case, we would use a .sendignore that looks like this:

We would also use a .fetchignore file containing:

Note that those ignore files are automatically accounted for by runaway when they exist in the current folder. You don't need to add any command line argument for those to be accounted for.

There exist a second case in which we could reduce the amount of data transfered from the local to the remote end: If we want to run the exact same code multiple times, then there is no interest in sending the data again and again. Runaway provides also mechanisms to help with this problem. which could be understood from its inner mechanics.

When runaway packs the folder into the archive, it will compute a hash out of the archive content: 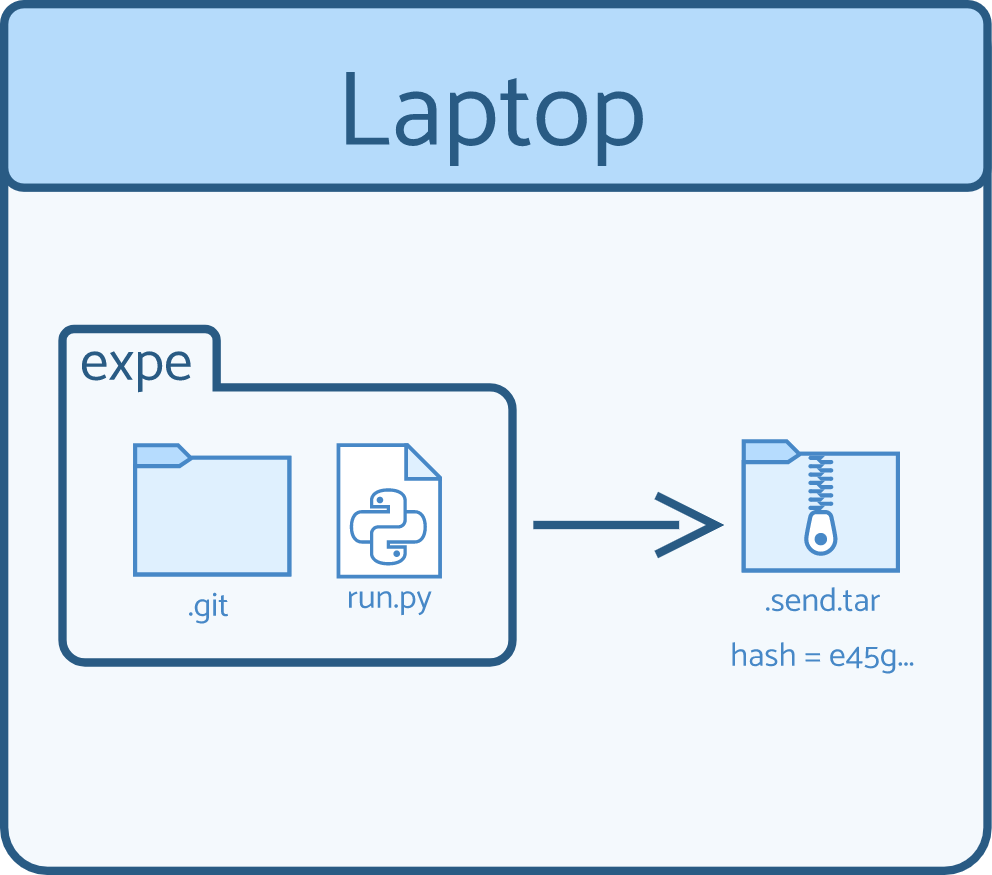 When transferred to the remote end, the .send.tar archive will be stored in a folder named after this hash (a sub-folder of a specific folder specified in the directory section of the profile): 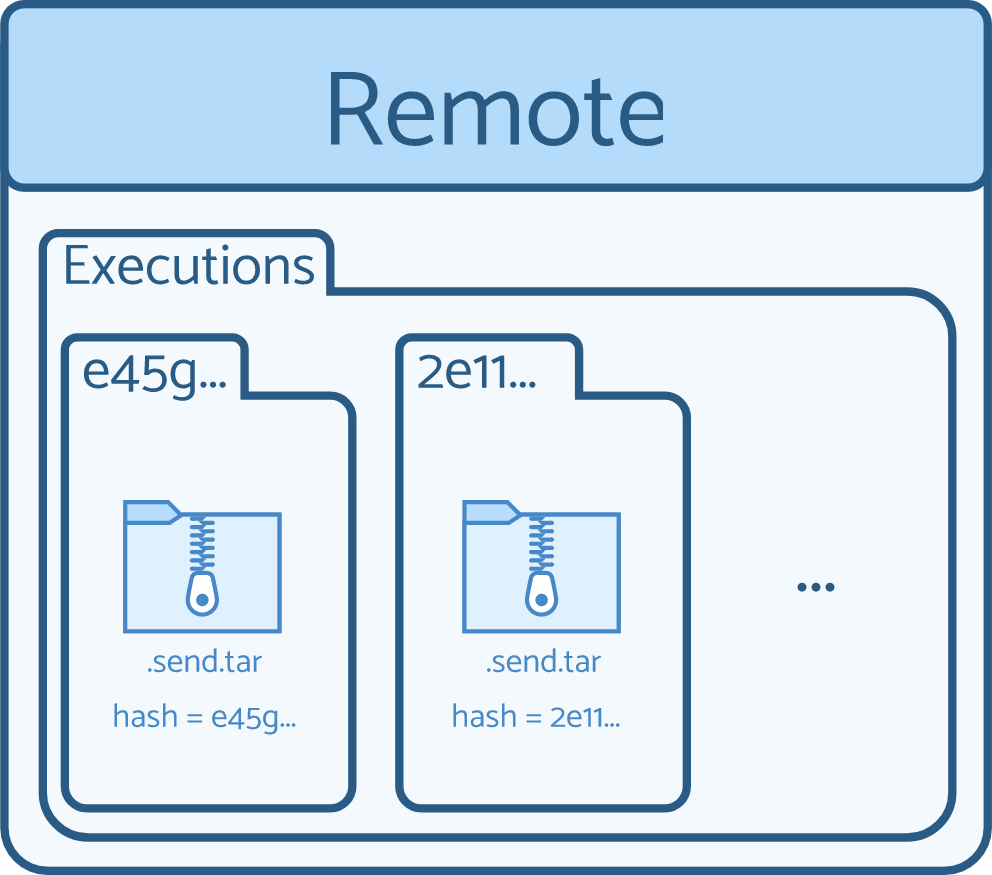 Before transferring the data from the local to the remote end, runaway will always check if there exist a folder named after the local .send.tar hash. If it exists, it means that the code is already on the remote end and there is no need to send it again.

If we return to our previous example, if you execute the runaway command with the --verbose option, you should see in the output the following log message:

This shows that runaway found the data on the remote end, and did not need to send it again.

If you navigate to the execution of the remote (if still on localhost check the directory section of ~/.orchestra/localhost.yml, here we consider the path ~/Executions ), you should see two folders:

Every time an execution is started, the .send.tar archive is unpacked into a new sub-folder with different (random) names. This means that if you run multiple time the same script with the --leave=everything argument, your local changes will be overridden, but on the remote hosts, all the results will be kept: 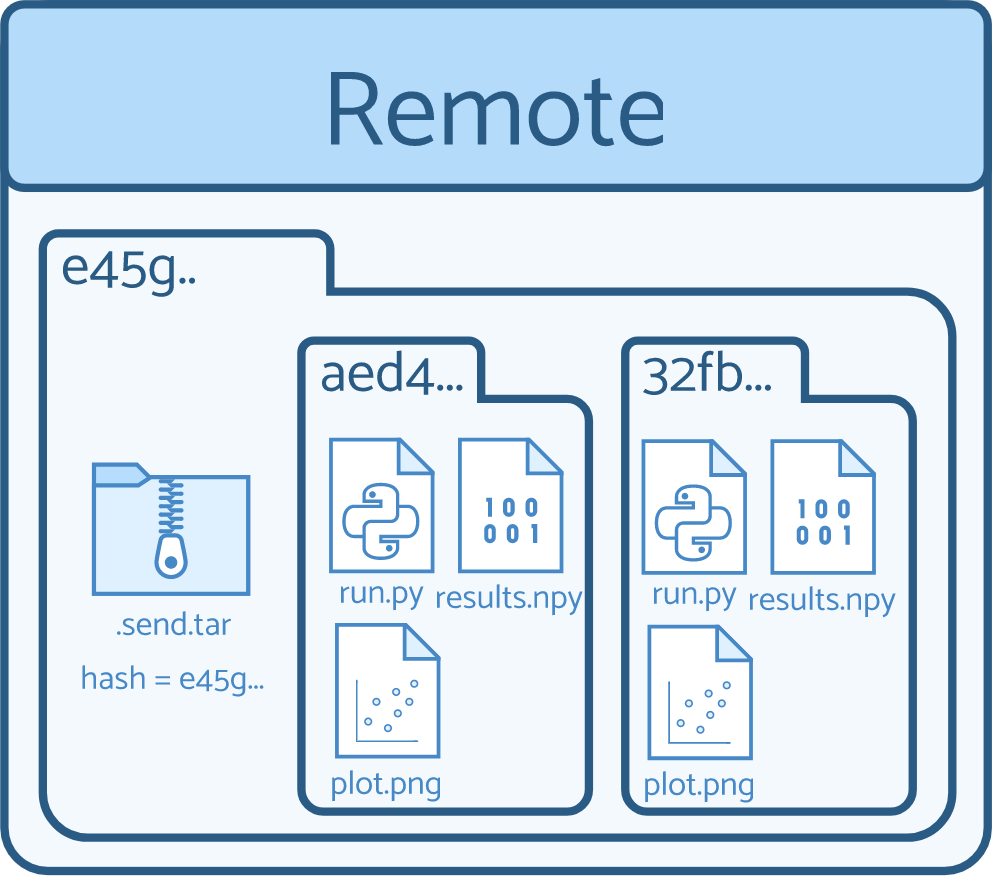 If we watch into one of those folders, we see:

Using the --leave command line argument of runaway, you can specify what you want to leave on the remote host after the execution:

Ok, until now we saw how runaway allows to run a script on a remote resource from your computer. It's already nice to test a simple script, but what if I want to run the same script for a batch of experiments (a usual tasks when you are working on an experimental campaign) ?

Runaway provides a batch subcommand that allows to handle this for you. And it is precisely where runaway shines most: It allows to run a large amount of experiments in parallel on a same cluster.

Where parameters_file is a path to a file containing newline separated set of arguments.

If I want to run my script with the following parameters on localhost:

Then I could write in parameters.txt:

And execute the following command:

This will create a set of tasks in the runaway process, as represented on the following figure:

For now we will assume that a given remote has a limited number of slots to execute tasks (see the next section for more on that). As slots are made available, runaway will submit tasks to the remote end:

When the two first tasks are over, runaway will submit the next to, and so on:

Until all the tasks were driven to completion. Executing the batch will give the following output:

The results of those experiments are stored in the batch folder, with subfolders named after the date of the creation of the task. If you prefer to put the results in different folders, you can use the --outputs_file to point to a file containing a newline-separated list of folders.

If you want to execute a batch of executions whose parameters can be written as a cartesian product, runaway allows to specify it using a parameters string: a string that allows to define several parameters at once by using two particular delimiters:

The set of arguments that will be used to run the script is the cartesian product of the different sets of parameters variants.

For instance instance, let's imagine that we want to run a script with the following parameters:

The arguments can be resumed in the following parameters string:

Which can be decomposed as

This allows to run grids of parameters pretty fast.